The return and volatility (risk) characteristics are used to construct an efficient frontier showing the minimum risk that could have been achieved at various returns by asset class diversification.

A brief overview of the past 50 years is also given between US, UK and SA returns on equities and bonds.

The graph below shows that equity performed the best over the past five years, but that this asset class was in fact outperformed by listed property over the past 20, 10 (marginally so) and one-year periods.

Bonds, cash and gold could have been used to achieve diversification and hence risk-reducing benefits in portfolios. 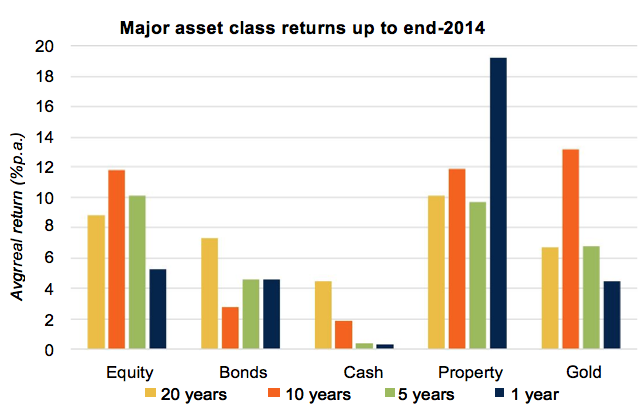 Over the past 90 years, i.e. since the beginning of 1925, the South African equity market has delivered an average annual real return of 8.4%, which means that a lump sum equivalent of R1,000 today, invested in 1925, would have grown to more than R1,35 million at the end of 2014 after inflation is stripped out.

For a person who started his working career in 1975 and retired at the end of 2014 at age 65, a monthly investment of R2,000 (at today’s value) in the equity market, would have provided this individual with around R8 million – probably sufficient to buy an annuity paying a monthly pension of between R55,000 and R60,000.

The statistical measure of risk, i.e. the standard deviation of monthly returns, has over 10-year average periods, ranged between 2% and 8%. The past 10 years’ standard deviation of nominal equity returns had averaged around 4.5%, which was the lowest such level recorded since the early 1970s. 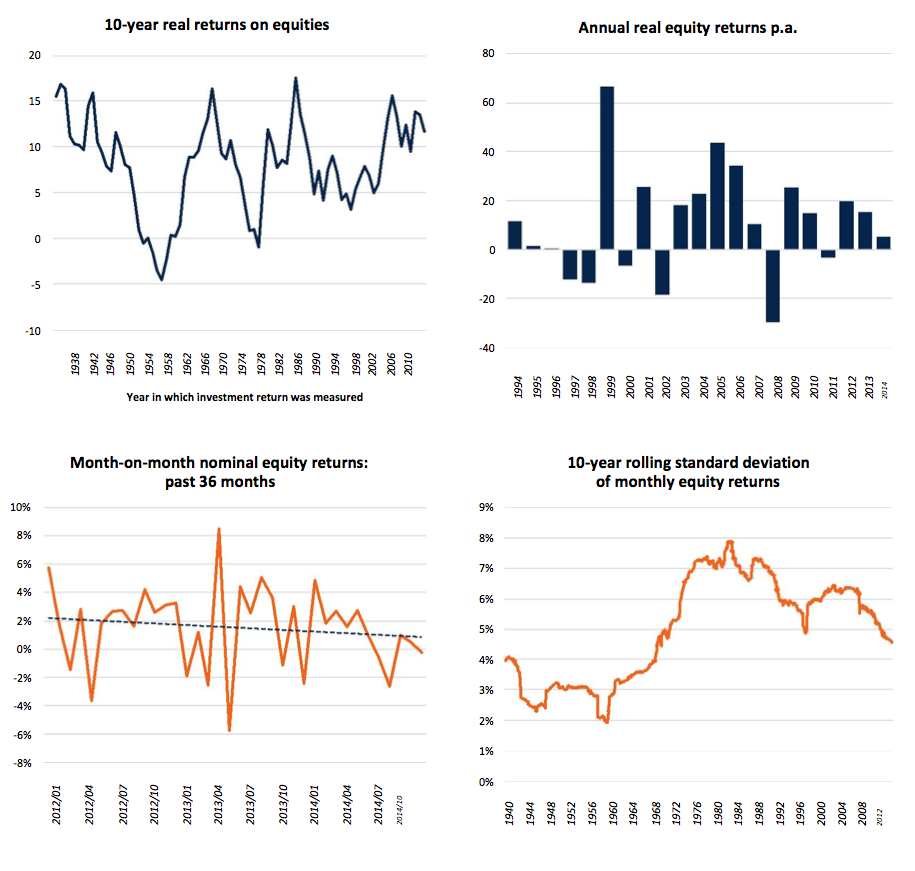 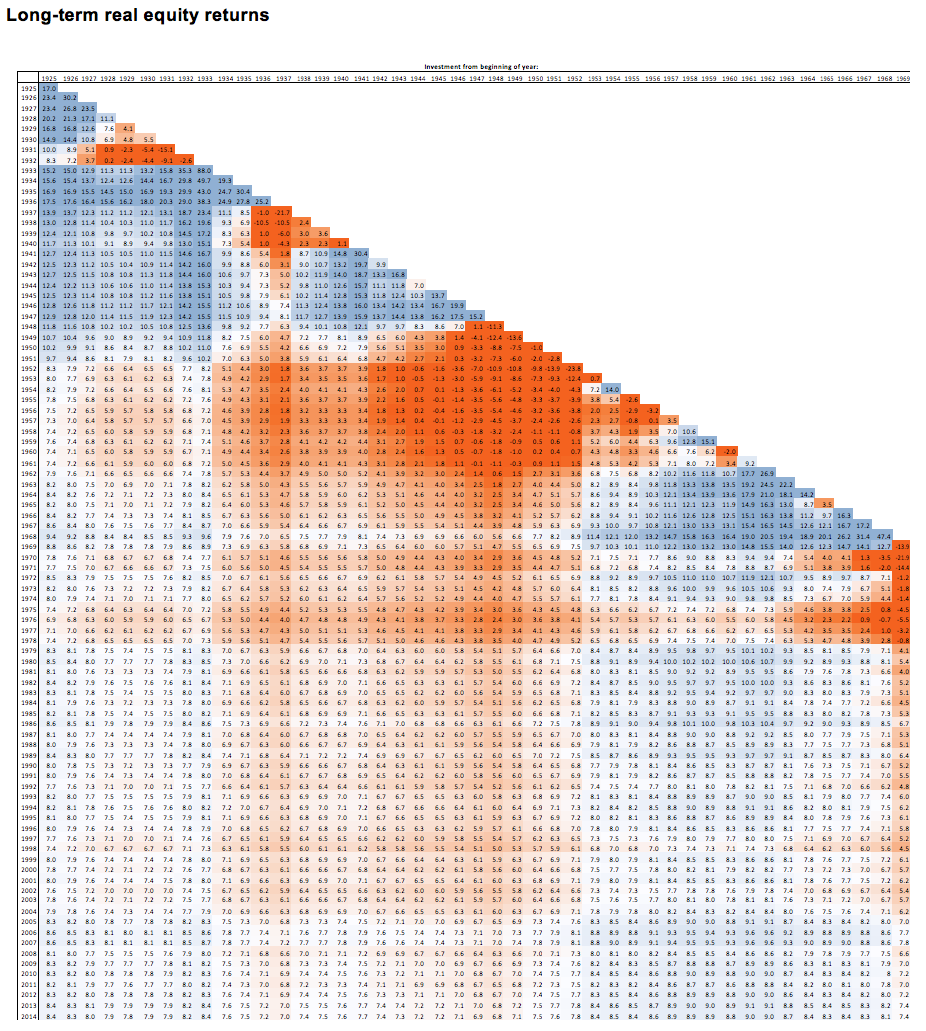 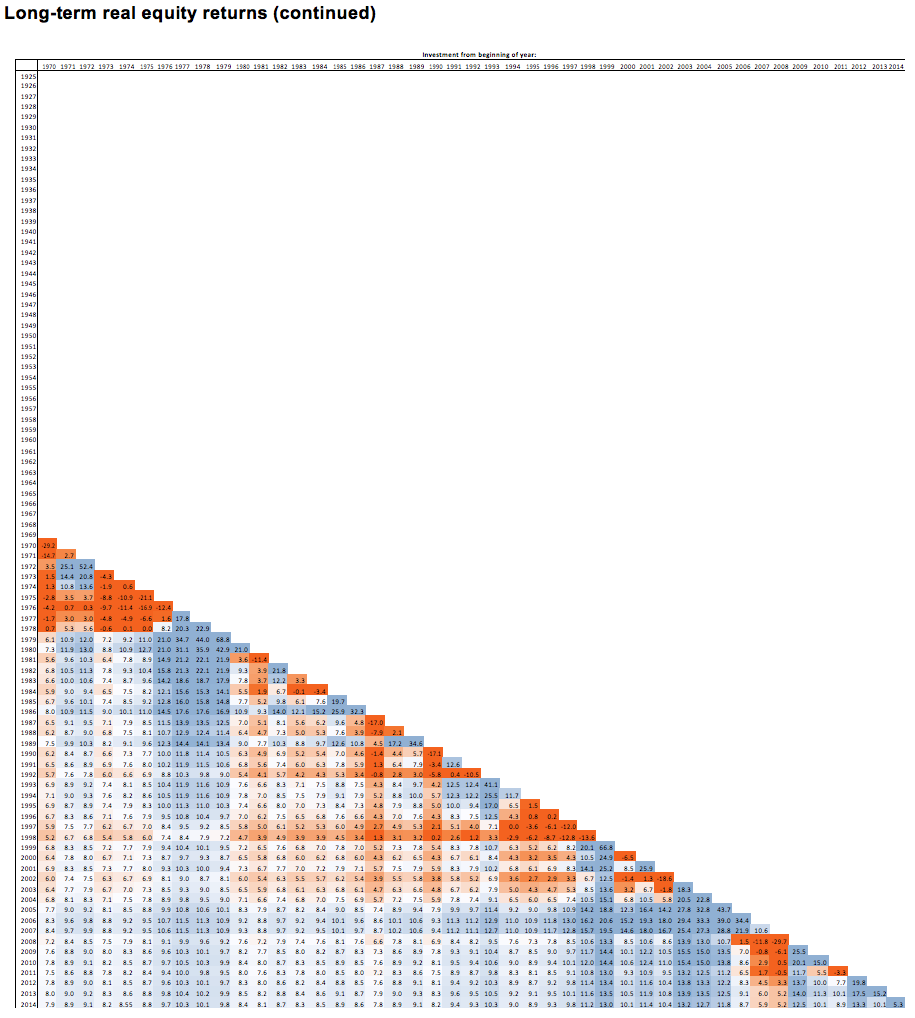 With increasing pressure on state finances amidst low growth, high inflation, sanctions and lack of access to capital, real bond returns rose by about 10 percentage points during the 1980s to adequately reward investors willing to invest in bonds. The 1990s saw times of further risk aversion, but with inflation declining and growth picking up, bond returns continued to rise as yields declined and state finances improved through most of the period between 2000 and 2007. Since the 2008/2009 financial crisis, bond yields have been increasing again as government deficits resumed and debt rose. This caused real 10-year bond returns to more than half since around 2005.

The statistical measure of risk, i.e. the standard deviation of monthly returns, has over 10-year average periods, ranged between 0.6% and 3.1%. The past 10 years’ standard deviation of nominal bond returns had averaged around 2%, which was much lower than the level recorded during most of the past two-and-a-half decades. 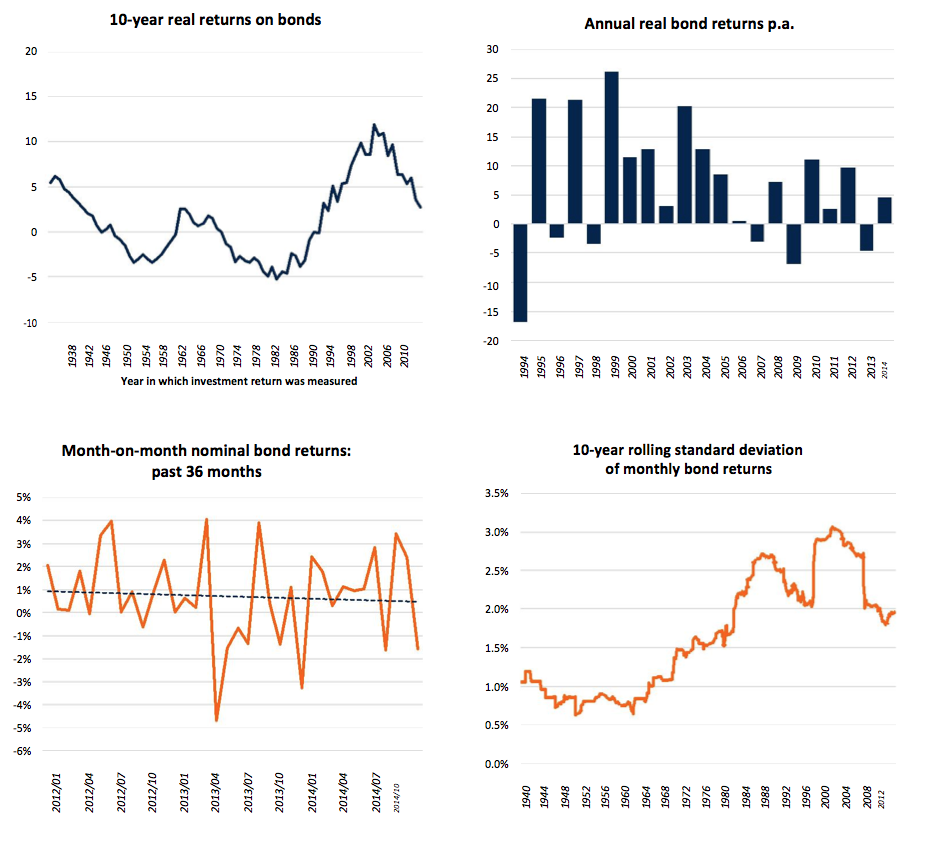 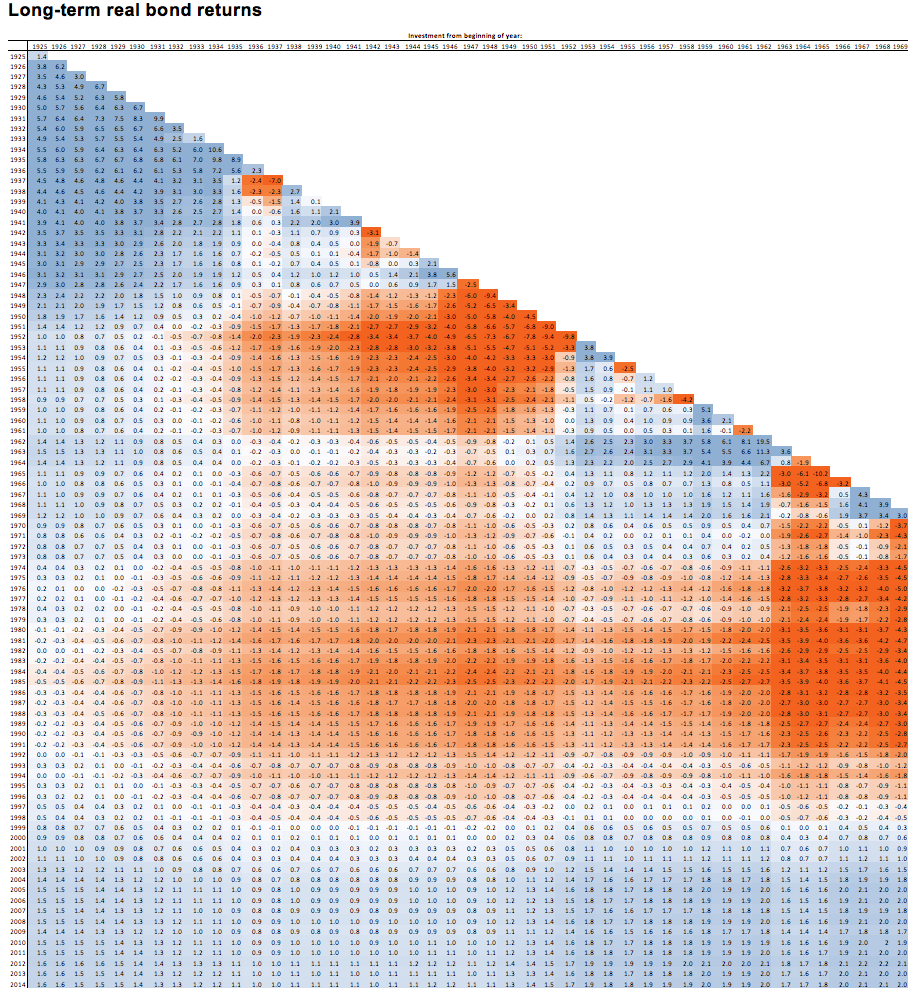 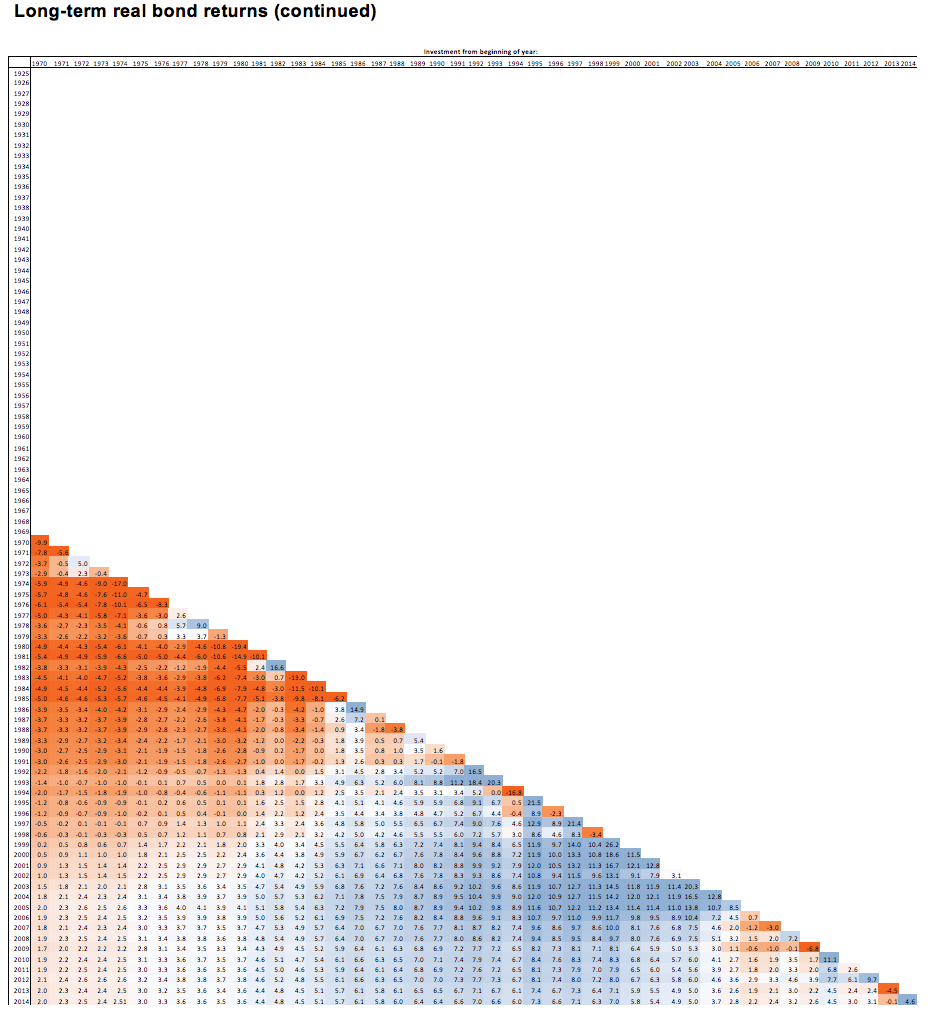 Sound monetary policy is regarded as one of the basic prerequisites for a successful economy. An important part of a sound monetary policy involves that risk averse investors should still get a positive real return on their investments. Looking at 10-year rolling periods, the 1940s and 1950s as well as the 1980s did not adequately reward investors for investing in money market instruments.

Over the past 90 years, i.e. since the beginning of 1925, the South African money market has delivered an average annual real return of only 0.9%, which means that a lump sum equivalent of R1,000 today, invested in 1925, would have grown to only around R2,200 at the end of 2014 after inflation is stripped out.

Real cash returns have been rather low since the global credit crisis of 2008/2009, the ensuing recession and the monetary stimulation in the form of lower nominal (and real) interest rates which have been in force since then.

The statistical measure of risk, i.e. the standard deviation of monthly returns, has over 10-year average periods, ranged between 0% and 0.45%. The past 10 years’ standard deviation of nominal cash returns had averaged 0.19%, which was amongst the lowest levels recorded since the mid-1970s. 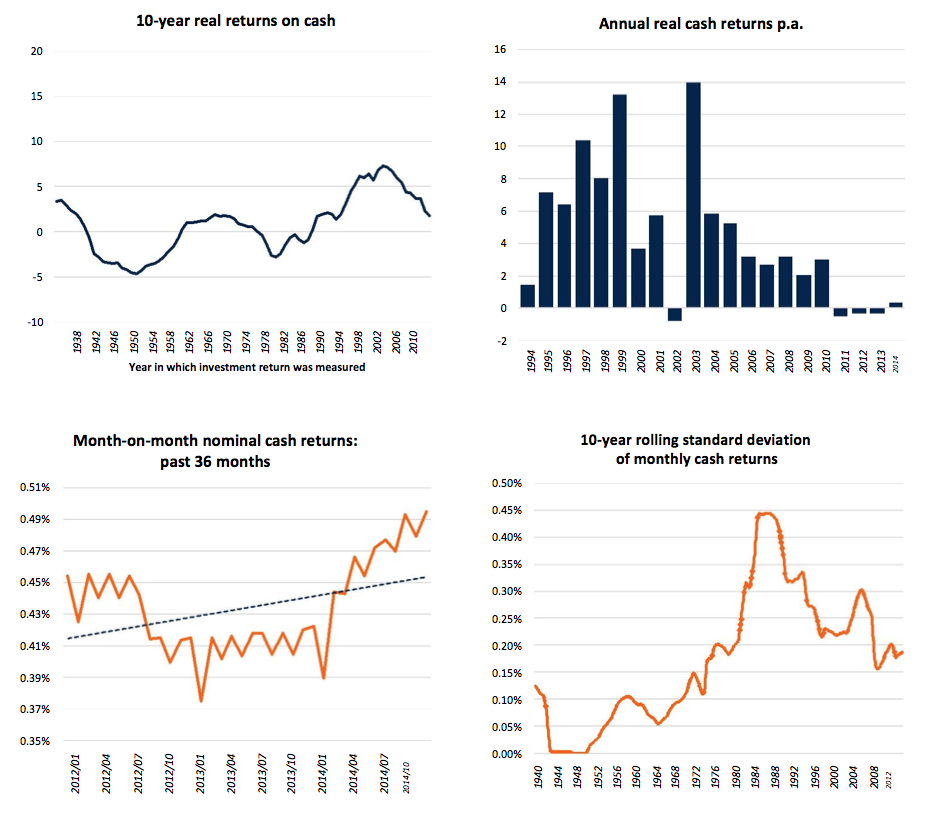 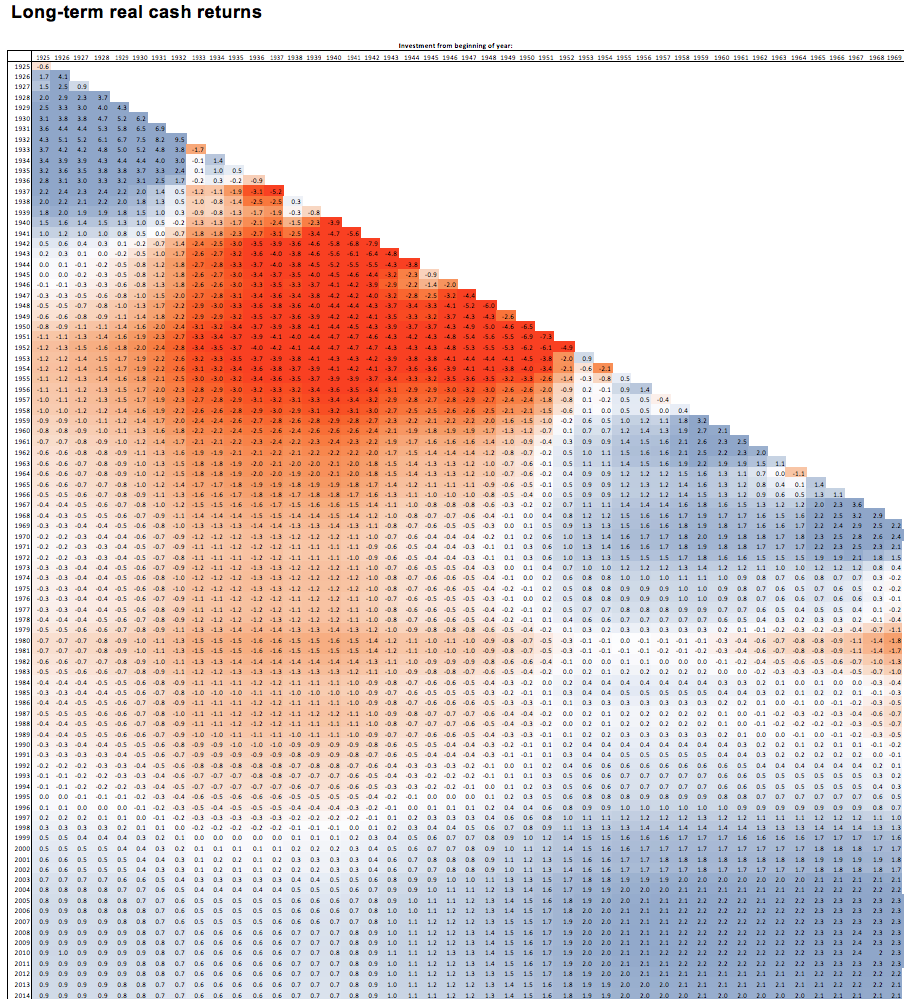 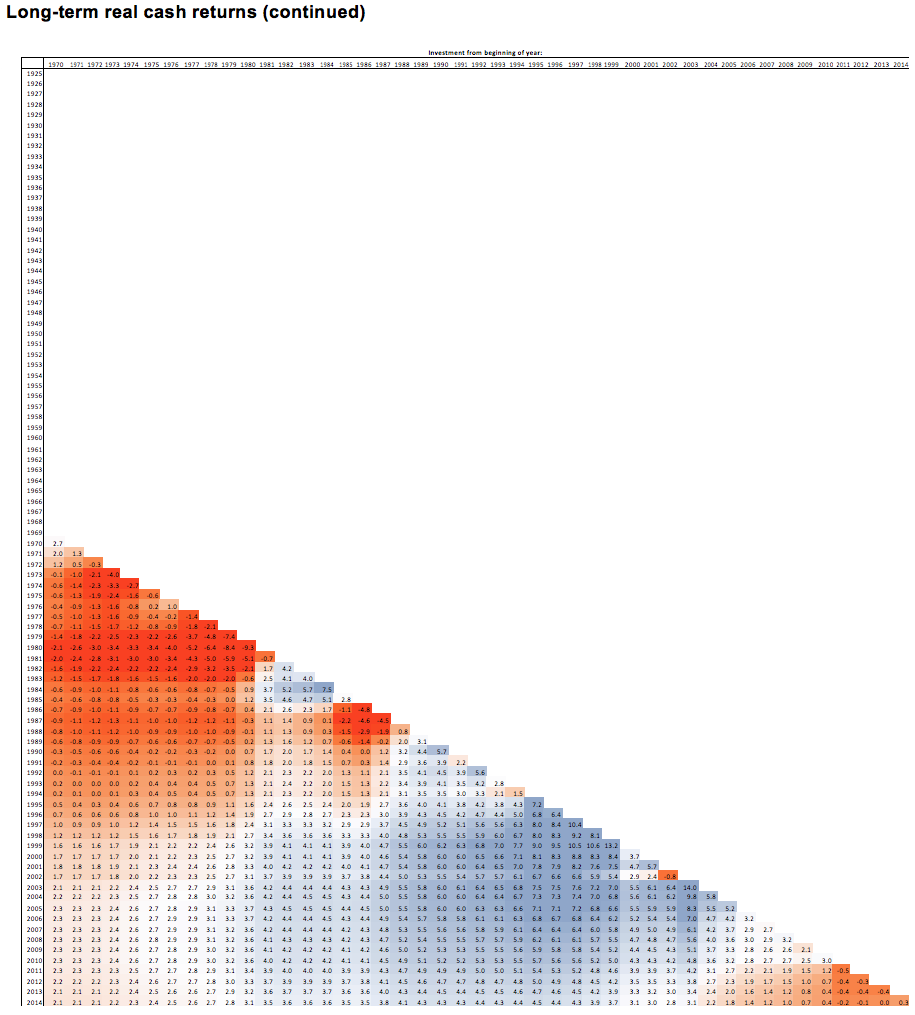 Listed property returns have been fairly solid, measured over 10-year rolling periods. Since the beginning of 1968, the South African listed property market has delivered an average annual real return of 6.5% compared with the 7.9% achieved on equity over this period. However, the investment risk associated with listed properties, has been lower than for equities and measured around 2.4% per month over the past 10 years.

In 2013, Real Estate Investment Trusts (REITs) have been introduced to the South African market which has no entry tax and no capital gains tax on the profit from the sale of property owned by the holding company. All distributions to shareholders or linked unit holders are tax deductible. The implication for retail investors is that income returns or yields are fairly high (usually 6% – 8%) while there is additional scope for capital gains. However, retail investors or investment funds holding REIT units are taxed in full on the income. 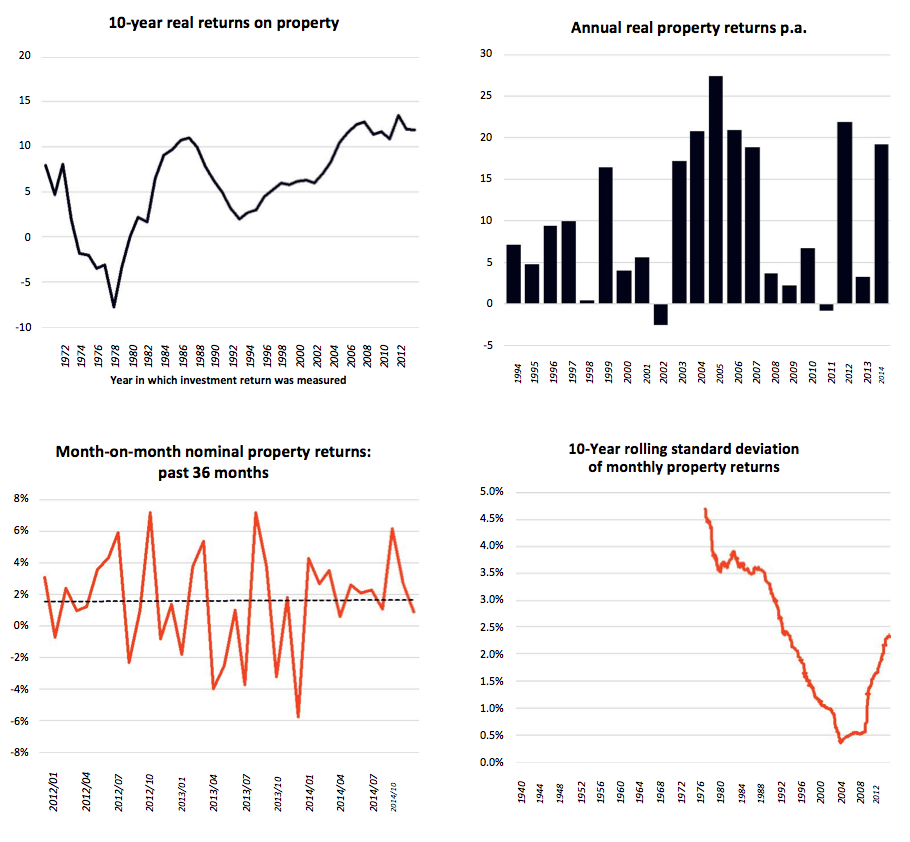 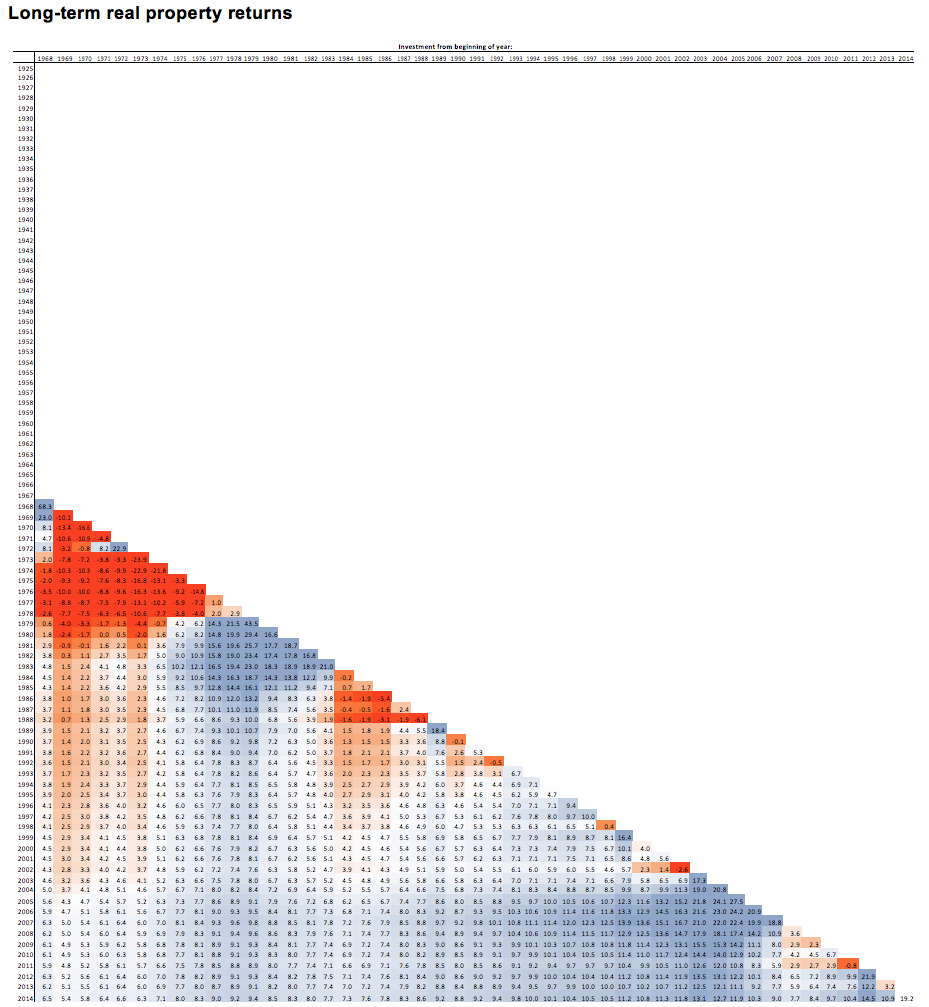 Gold suffers from three primary drawbacks: It is a physical commodity which could potentially entail safe-keeping costs; it does not have an income component; and it is no longer a “store of value” in the sense that currencies are directly convertible into gold. Its price is therefore often correlated with the so-called commodity cycle. However, the known reserves of gold ore are diminishing while extraction costs are rising. It can also be a good currency hedge during times of crises.

Since the beginning of 1966, gold, as measured by the rand bullion price thereof, has increased by 4.8% p.a. in real terms. 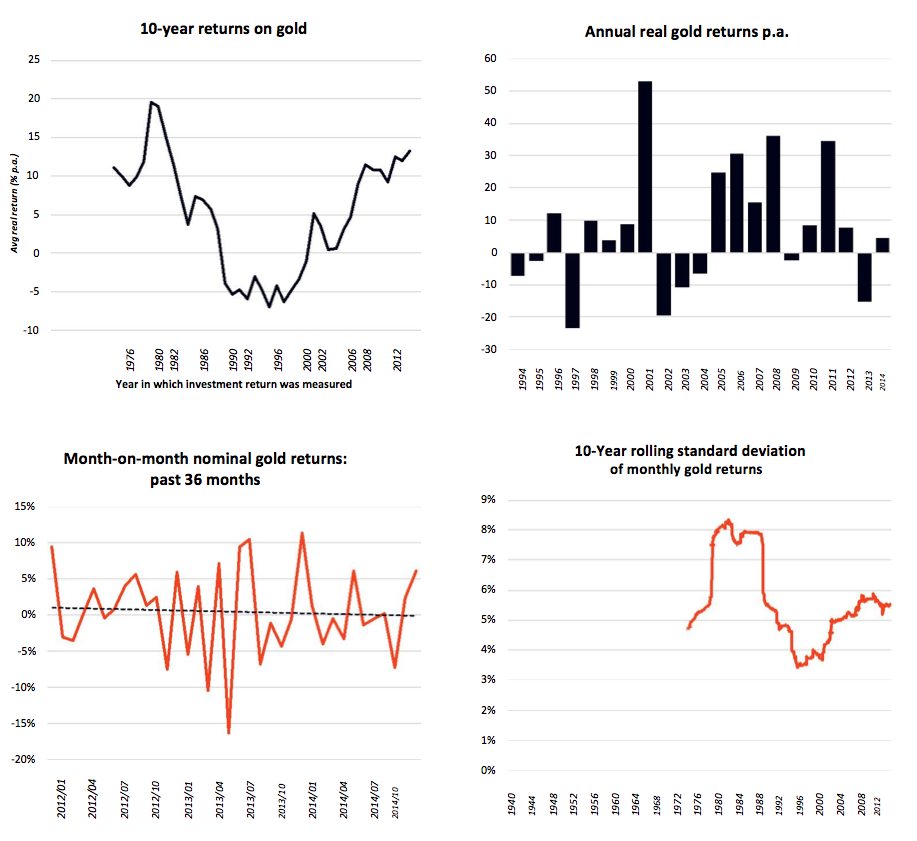 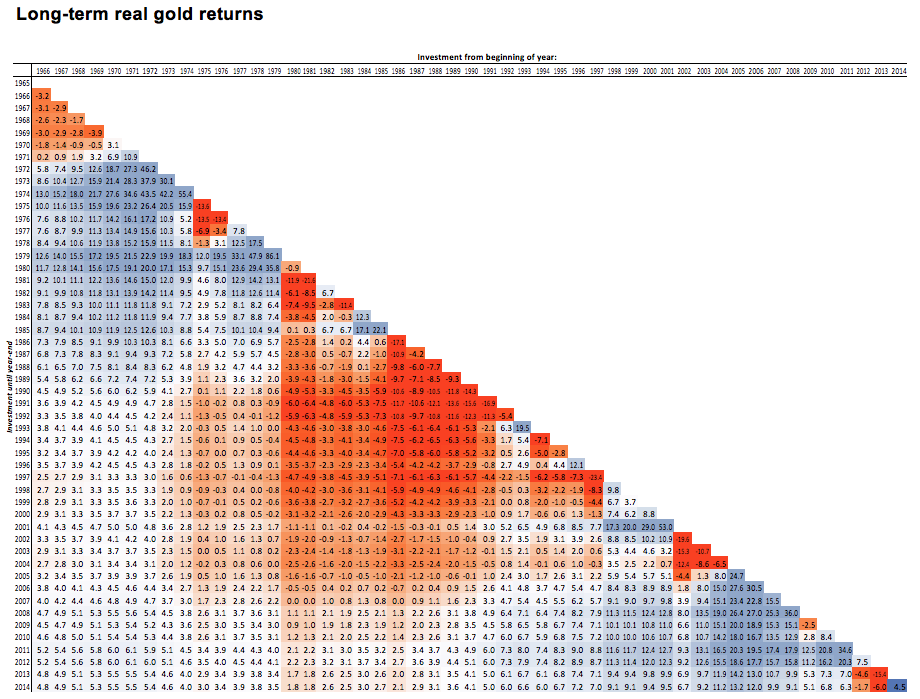 The five asset classes discussed previously were included in the optimisation. Returns were calculated by minimising the risk levels at each point on the curve. The only other constraints imposed were that cash needed to be at least 5%, while property was limited to a maximum of 15% of the portfolio. 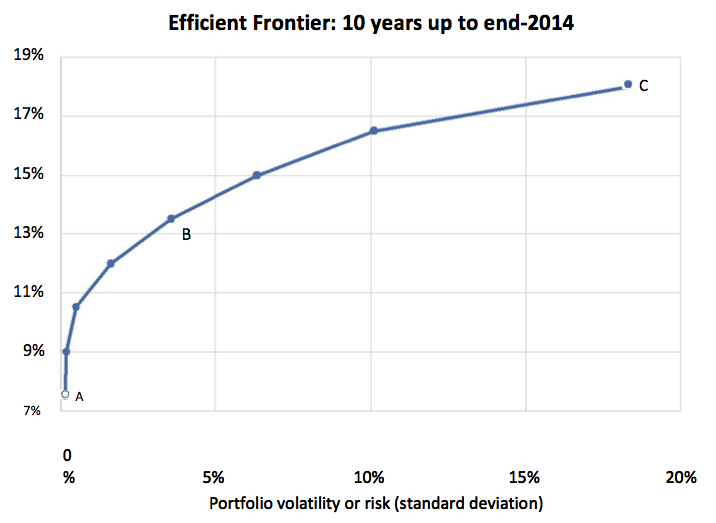 Although gold (coins or bullion) is not often included as part of a balanced portfolio, the results were interesting in the sense that over the past 10 years, gold coins (perhaps in the form of Krugerrands) did show some return enhancing / risk reducing properties in medium risk portfolios.

The lowest risk portfolio (A) would have been 100% invested in cash with a 7.5% nominal return and a 0.13% standard deviation, meaning that one assumed about a two-thirds probability of achieving a return between 7.4% and 7.6% on this asset class. For the highest risk portfolio (C), the equivalent risk probability would imply a return of between -0.3% and 36.3% with an expected mean return of around 18%. Equity would have made up 75% of such a portfolio.

Although the outcomes in this graph are based on fact (i.e. actual achieved returns), an investor could use historical risk and return measures to construct portfolios for the future, provided that the assumption is made that the variances and covariances remain more or less the same.

Note: This efficient frontier analysis was performed on annual nominal returns, while the returns on the individual

UK & US vs SA returns

Looking at exposures in local real currency values, South African equities were the clear winner in the 1964-74 period, while losses on South African bonds were lower than in the US and UK during this time.

The good equity returns in SA continued during all periods since then, although during three of the five 10-year periods either UK or US returns had a better real equity performance in local currencies.

Note: The UK real returns are from the Barclays Equity-Gilt study; US returns from Stern NYU 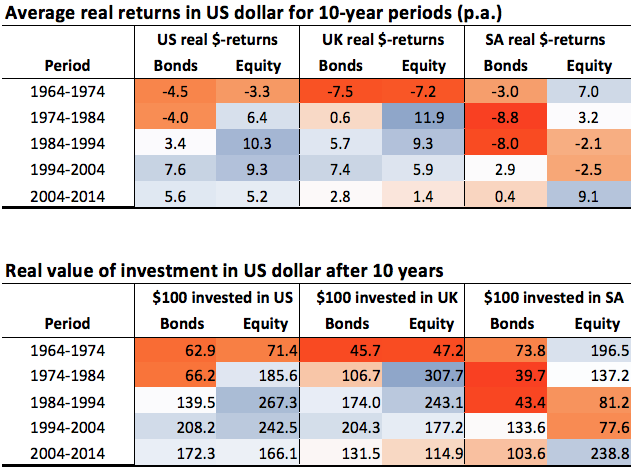 During the most recent 10-year period, real equity returns in rand terms again outperformed US and UK equity returns by a wide margin. The only other period during which SA bonds was the clear winner amongst the three countries, was during 1994-2004.

The third and fourth tables essentially tell the same story, but all values are expressed in dollar terms.

With the exception of the first 10- year period, South African investment returns were generally lower if calculated in dollar terms rather than merely adjusting for domestic inflation.

Although SA equities still outperformed during two of the five 10-year periods, SA bond returns during 1994-2004 were lower than in either the US or UK.