Geoff Blount, MD of BayHill Capital, finds that the underlying trend in the JSE has been negative since early 2015.

Given that the South African economy has been limping along for at least three years, the strong stock market has confounded analysts. It seems there is a disconnect between the JSE and the real economy, or is there really one?  Our analysis demonstrates that the JSE has, in fact, performed equally poorly during that time, not even keeping pace with inflation, but this has been concealed by the extraordinary performance of just two counters: Naspers and SABMiller.

Despite the recent rally, in the 12 months to the end of February 2016, the ALSI lost 3.9%. However, if we were to strip out SABMiller and Naspers from the ALSI performance, the rest of the aggregated market was actually down nearly 11% over the 12 months to end February 2016. These two shares collectively make up about 25% of the index, and were up 26% over the same period. Their performance has masked the severe bear market that the rest of the market is in.

Figure 1 below shows the 12-month performance of the JSE ALSI, the ALSI with Naspers and SABMiller stripped out and Naspers and SABMiller alone. The performance of the two since August 2015 has been dramatic with them rising by more than 38% in the last four months of 2015. With high market caps and a heavy weighting in the index, they have concealed the underlying trend in the ALSI. No doubt the mood at the JSE would be much glummer if we were to recognise the losses. 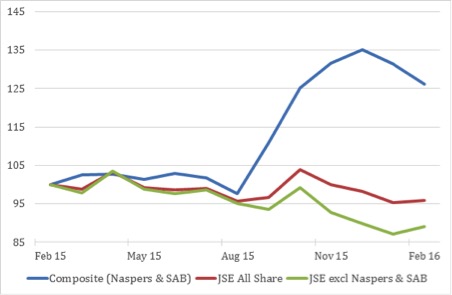 Both Naspers and SABMiller can be regarded as somewhat special situations; Naspers with its holding in Tencent Holdings in China. SABMiller, by contrast, is the subject of a R1.4 trillion takeover bid by Anheuser-Busch InBev, the world’s biggest brewer, which provides an underpin to the share price: the price is 46% above SABMiller’s closing value on 15 September 2015.

We did the same calculation over the three years to February 2016 and we found that Naspers and SABMiller rose 156% over that period, dramatically boosting the JSE ALSI. For the 36 months, the total ALSI was up 36%, but stripped of the two high flyers, the ALSI would have shown a very modest 14% return, or an annualized return of just over 4.5%. 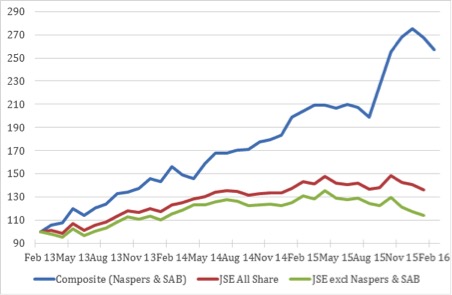 It is no wonder that active managers have struggled to beat the index over the last few years. Very few of them own the index weight in Naspers and SABMiller (and many are legally not allowed to given Unit Trust and Pension regulations), and so by definition will lag the index.