by Ingrid Goodspeed, Governor of the South African Institute of Financial Markets

Because of this law (…Wall Street Reform and Consumer Protection Act (Dodd Frank Act)…), the American people will never again be asked to foot the bill for Wall Street’s mistakes.

But if there is one constant in financial regulation, it is that we seem to be singularly incapable of learning from our mistakes, because we keep doing the same thing. And the same thing keeps failing. If regulation failed, we are told, the answer is more regulation. And if the regulators failed, the answer is to give those same regulators even greater powers over the financial system.

In recent decades the global financial system has changed noticeably:

That the financial regulatory system has not kept up with these changes in the financial system became painfully clear in the run-up to the financial crisis when regulators and policymakers alike, especially in the developed world, came under significant strain. Limitations, gaps and weaknesses in the supervision and regulation of financial institutions became evident as did the inability of regulators to monitor, prevent, or address risks as they built up in the system. In addition home and host regulators operated in silos and no regulator was tasked with protecting the financial system as a whole.

An inevitable and predictable result of the financial crisis and the subsequent global reform agenda to restore financial stability and help build a financial system that serves the real economy and supports economic growth, is a substantive overhaul of the financial regulatory framework. When discussing the cost of such regulatory change there are generally two extreme views: (i) that regulatory change has been unprecedented, capricious, sometimes antithetic as well as unpredictable and fragmented in terms of timelines and has placed onerous demands on financial institutions, particularly smaller ones, at the expense of economic growth and (2) the burden of regulatory change is warranted to avoid another financial crisis and the costs thereof pale into insignificance next to the price of a crisis.

The objective of this article is to open discussions on the cost of regulation in the aftermath of the financial crisis and to identify possible sources of such costs for individual financial institutions and the financial system as a whole.

Several measures are being introduced to achieve the global reform objectives of (i) restoring financial stability while still supporting other policy objectives such as appropriate market conduct (and consumer protection) and market integrity and (ii) building a financial system that serves the real economy and supports economic growth.

A substantial part of the reform agenda has focussed on reducing systemic risk across the financial system. These are highlighted in table 1:

In addition measures are required to support the policy objective of good market conduct and improve the behaviour of financial institutions and ensure their fair treatment of consumers. Such initiatives should (i) ensure sound consumer redress by strengthening financial sector alternative dispute resolution mechanisms such as the ombuds system; (ii) enhance the independence and reliability of credit ratings and (iii) promote competitive markets to provide consumers with greater choice amongst financial products and place pressure on product providers to keep prices competitive and quality high.

Securities regulators should encourage open, transparent, competitive, and financially sound markets that protect market users and their funds, consumers, and the public from fraud, manipulation, and abusive practices related to derivatives and other products.

Across the world the financial system has increased both in absolute size and relative to the real economy characterised by easy credit, significantly increased leverage, interconnectedness, innovation and complexity as well as the trading of financial assets and commodities unrelated to any underlying productive activity and the domination of short term technical trading in the currency and currency derivative markets. This is known as the financialisation or financial deepening of the economy.

There does not appear to be a straight-forward causal relationship between the financialisation of an economy and the annual rate of economic growth, particularly in developed economies. It is generally accepted that strong and deep financial markets are required to promote economic growth by providing diversified and market-based intermediation between ultimate borrowers and investors. However there is a point at which financial deepening leads to financial excesses and becomes a drag on growth i.e., higher growth in the financial sector reduces real growth.

There are a number of possible policy responses to financial excesses:

Cost of the global reform agenda

The costs of the reforms are generally considered to be private costs to financial institutions (and their shareholders and employees) that are offset by wider economic and societal benefits to stakeholders in society, including customers (e.g. depositors, borrowers and consumers of financial services), creditors, and taxpayers. However it may be that such private costs will be passed on to the customers of individual financial institutions.

Scale of the legislative response

Increased regulation was an inevitable result of the financial crisis. Table 2 attempts to indicate, albeit rudimentary, the scale of the legislative response post the 2007/08 financial crisis.

Table 2: Scale of the regulative response

South Africa is also in the process of introducing a number of pieces of financial sector policy and law. These include:

The rise in the number of people required by the regulators is a predictable result of the increase in scale of the legislative response.

The trend is similar in the US. In 2009 there were 14000 regulators employed at federal regulatory bodies – Federal Deposit Insurance Corporation (FDIC), Board of Governors of the Federal Reserve (Fed) (bank supervision and regulation), Office of the Comptroller of the Currency (OCC) and Securities and Exchange Commission (SEC). This increased to 18 500 people (about 3 regulators per bank) in 2010. And these numbers do not include state supervisors of state-chartered banks.

Financial institutions also need to increase human resources, particularly compliance people, to deal with the increase in scale of the legislative response. For example JPMorgan Chase employs almost 1 000 people to ensure the group complies with the rules imposed in the aftermath of the financial crisis.

The world’s largest banks have paid substantial fines (see table 3) since 2008 for breaching a variety of financial regulations.

The fines continued after 2013. In May 2015 it was reported that six global banks will pay over USD5.6 billion to settle allegations that they rigged foreign exchange markets.

Cost to the financial system

The costs of regulation that will be a problem are those that arise if the regulations hinder the ability of the financial system to fulfil its key economic functions of financial intermediation, payment services provision, risk transformation and insurance. For example if increased liquidity requirements and deleveraging can only be achieved at the cost of lending to the real economy.

Many financial institutions, particularly in the US and South Africa, are operating in regulatory structures that are cumbersome and costly, requiring multiple licences and subject to several at times competing regulators and policymakers that have different and at times conflicting objectives. This has led to fragmented supervision, regulatory arbitrage and at times delayed and weak enforcement.

In addition since part of the cost of regulatory compliance is fixed, it falls more heavily on smaller financial institutions. Because of their scale and the resources larger institutions are better able to absorb new regulatory burdens than smaller ones. This unequal regulatory burden eventually results in a less competitive financial sector as smaller institutions overcome by the volume and complexity of regulations are forced to exit or merge with other institutions. For example at the end of 2010 there were 7658 banks in the US. By the end of 2013, the number of banks had decreased by 11 per cent to 6 812 banks. As smaller banks exit the industry, the market power of larger banks becomes more entrenched as does their too-big-to-fail status.

To avoid legal complexity and fully harmonise regulatory and supervisory standards across the financial sector it is necessary for financial sector regulators and policymakers to work closely together to (i) remove regulatory gaps, overlaps, and conflicting policies (ii) allow appropriate and effective prudential and market-conduct supervision of all market participants (iii) consolidate and better allocate resources; (iv) put in place appropriately-represented governance structures and parliamentary oversight and (v) reduce opportunities for regulatory arbitrage and competition amongst regulators and (vi) evaluate the quality of a group’s business model, management, risk-taking behaviour, integrity and market conduct.

Financial institutions will need to respond to the sweep of regulatory change. There are a number of practical issues that institutions could consider:

In South Africa a number of regulators, agencies and self-regulatory organisations share oversight of the financial system (see figure 1). Since a number of changes, in particular the introduction of the twin peaks regulatory framework, are envisaged to this regulatory structure it is important that institutions have a thorough understanding of which regulator will be regulating or supervising which part of their business. 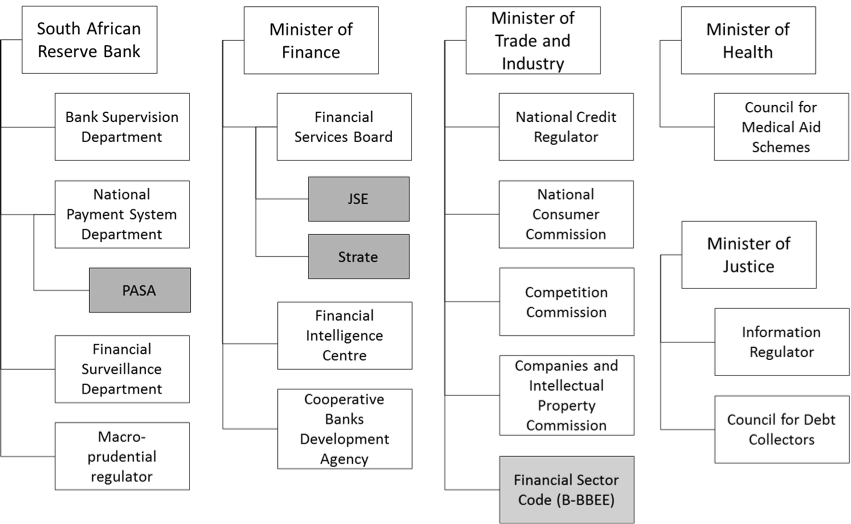 Know what is guiding your regulator

Financial institutions should also understand what policy is being developed by international standard setting bodies (see figure 2) for implementation in local jurisdictions. 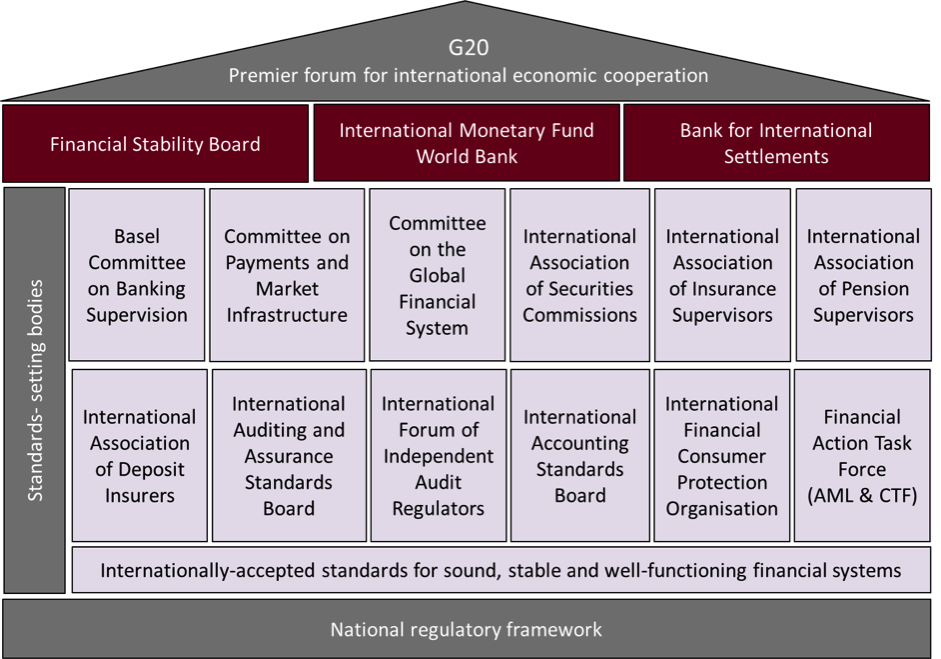 In addition institutions should review all compliance resources and skills to ensure they have the capacity and capability to successfully handle and implement new regulatory requirements.

A regulatory framework with clear law, objective criteria and broad principles, backed up by well-defined rules, is necessary to ensure a stable competitive financial system that protects consumers and ensures access to finance for consumers and small businesses. However changes to the regulatory framework should be implemented in a considered and planned way to avoid unintended consequences and unnecessary regulatory burdens, especially on smaller institutions.

European Commission. May 2014. Economic Review of the Financial Regulation Agenda. Accessed May 2015. http://ec.europa.eu/internal_market/finances/docs/general/20140515-erfra-working-document_en.pdf

Stanley Fischer. March 2015. The Importance of the Nonbank Financial Sector. Accessed May 2015. http://www.federalreserve.gov/newsevents/speech/fischer20150327a.htm

Ingrid Goodspeed. October 2011. Out of the shadows: an overview of the shadow banking system. Accessed May 2015. http://financialmarketsjournal.co.za/oldsite/14thedition/printedarticles/shadowbanking.htm

Andrew G Haldane. August 2012. The dog and the frisbee. Accessed May 2015. http://www.bankofengland.co.uk/publications/Pages/speeches/2012/596.aspx