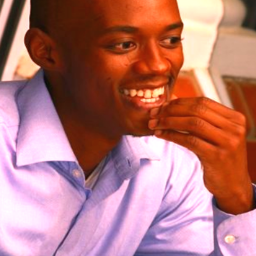 Financial market participants require speed in a number of their activities. On the one hand; they require speed in accessing market information, processing market data and planning their reactionary strategies. In such instances, users with the fastest access to the market have the advantage of knowing -before all other participants- what the current state of the market is, and how to best react to it in order to make a profit or avoid a potential loss.

On the other hand; they also need speed in executing their reactionary strategies. Since most exchange central order books are designed to match trades on a price/time priority basis, again, in this instance, users with the fastest reaction time will always enjoy a higher execution probability than all other participants.

In essence, the basic ‘information advantage’ and ‘arms race’ concepts haven’t changed; it’s still the very same concepts that were used by Nathan Rothschild to amass his wealth. The only difference is our generation prefers to compete with computer networks as opposed to carrier pigeons and horse drawn messengers.

In simple terms, latency is the time delay experienced when an electronic message is passed from one point to another

[2]. An example could be the time delay experienced when an exchange publishes a certain piece of market data, and the moment when that piece of data is received by the market participants.

This delay, although generally measured in milli- and micro- seconds, may not mean much in the world of long term, directional investment management participants, but it could bear a devastating effect on the profitability of short-term, non-directional statistical arbitrage traders and market makers (often referred to as low latency strategists or latency sensitive market participants).

To get more clarity on the concept one could consider the commonly quoted example of two traders, in this case, one sitting in Sandton and the other sitting in Cape Town, both trading the same financial instrument on the same exchange venue – the Johannesburg Stock Exchange (JSE), and both using the very same best-in-class network, hardware and software platforms and configurations available on the market.

The trader in Sandton is geographically closer to the JSE platform, and a single packet of trading price and volume data (disseminated by the JSE to the entire market) would possibly take 2.7 milliseconds to be transmitted through the wire from the exchange to his terminal; while the trader in Cape Town is geographically further from the JSE, and the very same packet of data would possibly take 20 milliseconds to be transmitted to his terminal. This means the trader in Sandton, by virtue of geographic location, has a 17.3ms information advantage over the trader in Cape Town. 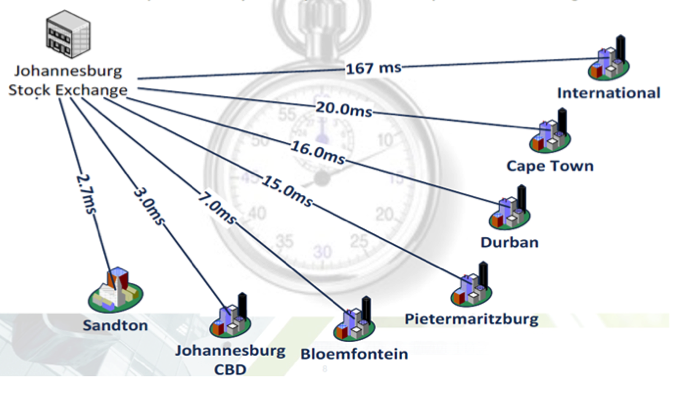 With a ‘0.0173 seconds’ time window being less than a blink of an eye, this advantage has generally been regarded as trivial in ‘the age of the human trader’. However, with the current trading climate being increasingly dominated by high frequency trading and algorithm trading platforms (often designed to execute over a few hundred thousand trades per second), the 17.3ms window can represent a significant competitive advantage. It represents a 17.3ms head start for the Sandton trader’s ’algo’ to analyse the market data, and plan an appropriate reaction strategy.

Furthermore, if the Sandton trader’s ’algo’ decided to react on the information received, it would take also 2.7ms to submit his execution order to the JSE Trading Engine. The total cycle could in essence take ±6ms. This would mean that in the 20ms that it would take for the Cape Town trader to receive his initial data packet, the information contained therein would be at least 14ms out of date, and as such, potentially useless. In fact by the time the Cape Town trader receives his initial information packet, the Sandton trader could have already received three more market data updates and executed three more trades. The picture is even worse for a trader sitting in another country, as seen in Figure 1.

Colocation is a service that allows all financial firms an opportunity to place their automated trading machinery just a few meters away from the exchange trading platform (order matching engine and market data dissemination system). The underlying premise is that this closeness reduces the communication times between the client’s systems and the exchange’s systems, and as a result improves the speed of access to market, and reduces the overall latency caused by the spatial distance between the exchange and the participants [3].

Again, the basic ‘pit trading’ concept has not changed; it’s still the very same concept of stock exchanges allowing all participants to trade from a centrally located trading floor ‘the pit’. The only difference is that our generation prefers to use automated trading machines as opposed to human traders.

To facilitate this service, an exchange would build a colocation facility (data center) a few meters away from its trading platform, and allow all market participants an opportunity to place their servers in this facility, and in doing so, enjoy the benefits of faster market access and reduced latency, as seen in the Johannesburg Securities Exchange (JSE) example below.

Figure 2: Colocation as a solution

One of the main goals of this service is to ensure that all members enjoy the same speed of access to the market, regardless of their physical location. In essence, it’s all about promoting ‘fair markets’ and creating a level playing field for all. In the example listed above, this would mean that both the Sandton and the Cape Town trader would get a chance to enjoy the same speed of access to the markets, and so will the international participants located in other countries.

The concept has gained enormous support from the international financial markets community. In the past five years alone the number of stock exchanges offering colocation facilities has increased drastically, with some of the forerunners in this field including the New York Stock Exchange (NYSE), the National Association of Dealers and Automated Quotes (NASDAQ), the London Stock Exchange (LSE), Tokyo Stock Exchange, Deutsche Börse, Australian Stock Exchange (ASX), Chicago Mercantile Exchange, etc.

To a large extent, the emerging markets have also been very receptive of this trend. While the industry has not heard much from the Shanghai and the Shenzhen Stock Exchanges in China, a number of the other members of this group have made significant strides in this direction, this includes the BM&FBovespa in Brazil, the Moscow Stock Exchange, Moscow Mercantile Exchange, the St Peter’s Stock Exchange and the RTS Stock Exchange in Russia. At present, the same developments have also started taking shape in the Bombay Stock Exchange in India and the Johannesburg Securities Exchange in South Africa.

The concept does not seem to have gained much popularity in African financial markets – at least not yet. As for now, the only stock exchange in Africa that has announced its intentions to offer colocation hosting services has been the Johannesburg Stock exchange (JSE). This coming shortly after the JSE announced its recent upgrade of the automated equities trading engine (the JSE TradElect) to a new high frequency trading and algorithm trading friendly engine the Milleneum IT Exchange. With the Egyptian Stock Exchange also recently upgrading to the very same trading platform [5] it seems very likely that it will soon follow suit. However, with the African financial markets currently undergoing numerous reforms (e.g. regionalization of stock exchanges), it is expected that the African Securities Exchange Association (AfricanSEA) will also be releasing reports on developments aligned with this trend, especially for the regional exchanges.